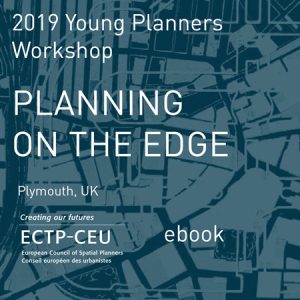 In accordance with the ECTP-CEU’s objectives, the initiative of the Young Planners Workshop seeks to set out young planner’s perspectives and experiences in a frame of new European cities paradigms
The workshop theme on planning on the edge focuses on a broad perspective of city frontiers and territories frontiers.
This perspective includes the relationship of cities with physical limits: the water; particularly by the sea and coast, rivers or lakes, (Planning coastal settlements, urban rivers corridors… etc, urban generation around the water…); but also relationships with other peripheral limits, nature urban voids; transitory zones in the city with people coming and going; even Edge as the transition from one physical environment to another: green, peripherial rural areas.
Border, frontier or divided cities can be considered as cities on the edge. A border cities close to the boundary between two counties, states or regions have highly cosmopolitan communities, as traveling and trading often go through the town. They can also be flashpoints for international conflicts, especially when the two countries have territorial disputes.
The workshop also includes the perspective of Cities on the edge thinking in cities located far from the centre of their country and sometimes closer to abroad with a potential to develop their position “on the edge” and its connectivity within Europe and the world.
Finally planning on the edge includes urban policies on the edge from a social-economic and cultural approach:
a) relationship with the periphery of the society, within the cities and amongst different kinds and scales of cities,
b) cities which have a “transit poles” social structure, “immigration port”… etc
c) thinking in the different effects and results of the globalization in big cities, small cities and rural areas.

LANDSUPPORT has been very active and developing tools as indicated in the project objectives. Now, it is time to talk about them!